Moving Mountains # XII
February 2015, Bregenz/
The action begins on Leutbühel–Square in Bregenz. I attach my body with Gaffa tape on a bicycle, which I received in Bregenz as a present. The aim of the irritating action is to get in contact with the people in Bregenz. I answer them that I need help with my action. At first to attach my body to the bike. Then I want to be pushed up the hill. The endpoint of my performance is the Palais Thurn und Taxis, where I, parked at a hydrant, get rid of the Gaffa tape. 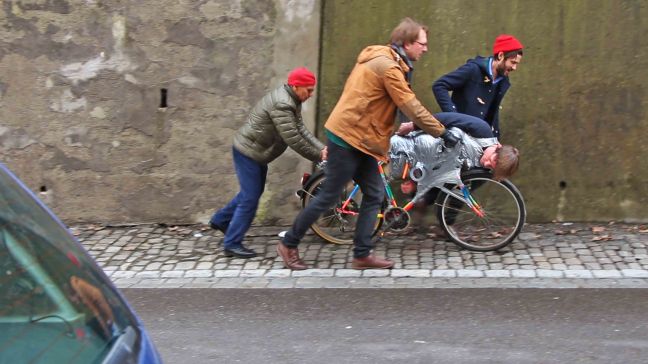 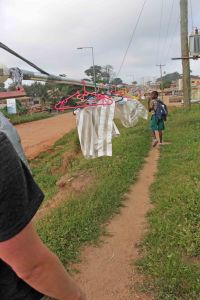 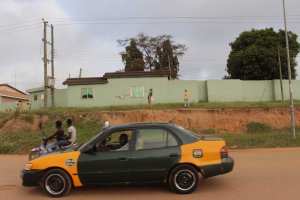 Smile, October 2014
Video projection (Duration: 11 minutes). Projection size: larger than life portrayal/ The entire physiognomy of the face is needed to smile. It is an expression of joy, and among other things serves to contact, but can also be used instrumentally, for example to enforce your own needs. The beginning of this work is an attempt of a smile sincerely meant. The face contorts gradually into a grimace. What should find expression as a sign of sympathy, is lost without a real counterpart. This leads on to a strenuous activity, which is clearly visible on my face.

Volition, June 2014
Projection: original size of the head of the artist/ The projection shows my face from the front. A hand rubs about seven minutes over my face. Rubbing the facial skin is an everyday action, which is usually performed when you run the risk of fatigue or other factors, such as Alcohol or drug use. On the border to lose control of your body and mind. This action is therefore an act of self-perception.  >read more< 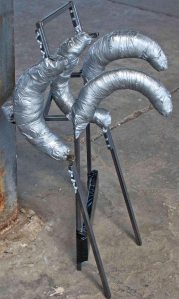 Moving Mountains # III, June 2014, Dusseldorf
Sculpture (steel, stainless steel, tape, people) and multi-part performance/ 1. The storage condition: during this the sculptures lean against a wall andwait to be used. 2. The plot: two people keep using the metal frames, a third person is between them. The actor in the center is not at the mercy of the other actors, but in turn has of control over the situation: the sculpture is completed only by the presence of all actors as a whole. The performance is repeated at different locations. 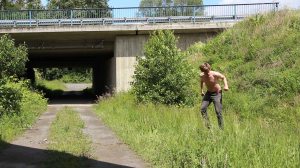 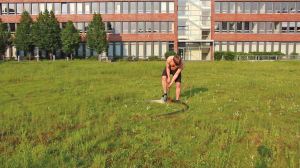 Volition # III, June 2014
Multi-part intervention at various locations/ The metal plates (2 m x 0.1 m) are designed to enable me to carry them during my search for a suitable place. When I find this place I screw the metal plates together to a ring with wing screws. I open the earth with a spade and bury the metal circle. The upper edge of the metal circuit (2mm) remains to be seen. The radius of one meter refers to the private space of each individual person. 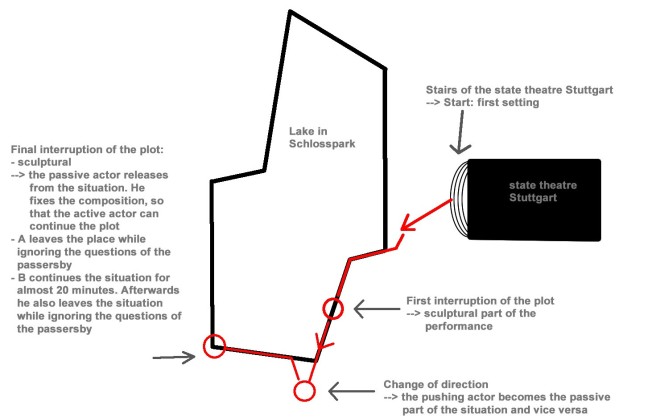 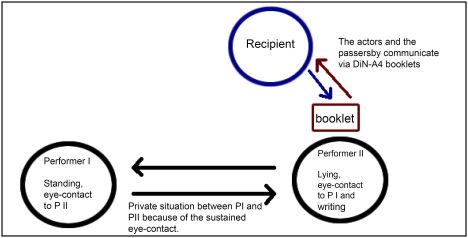 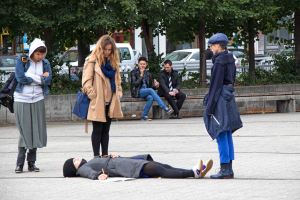 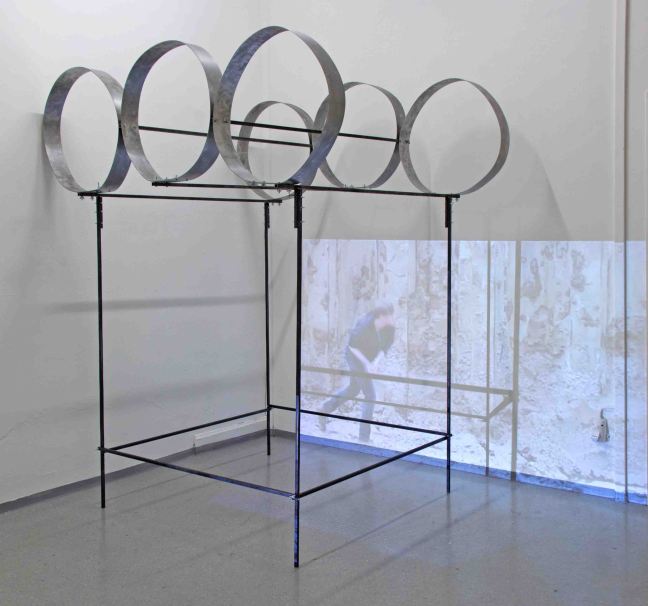 Türen schließen # IV
Academy of Fine Arts Karlsruhe. October 10, 2013; 19.00 o´clock. Photos: Pietro Pellini/ I produce an intimate space by this situation, which is open for the recicpient. So he is able to influence or even to destroy this situation by knocking off the metal rod. The circumstances are held by this tension in a permanent state of limbo. The performance lasts one hour. 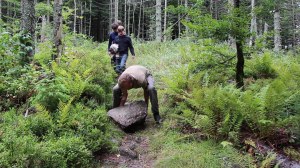 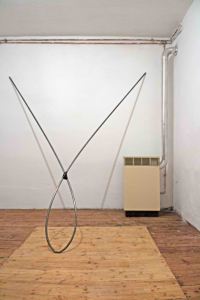 Türen Schließen III, May 2013
I turn a six meters square metal rod into a circle. In an almost one hour-long process I reduce the radius of this circle as far as the material itself, my strength, and the given circumstances admit. The plot ends when my sweaty palms lose grip on the metal rod. I fix the situation after the performance with tape. Thus the created object is merely the outcome of the action. 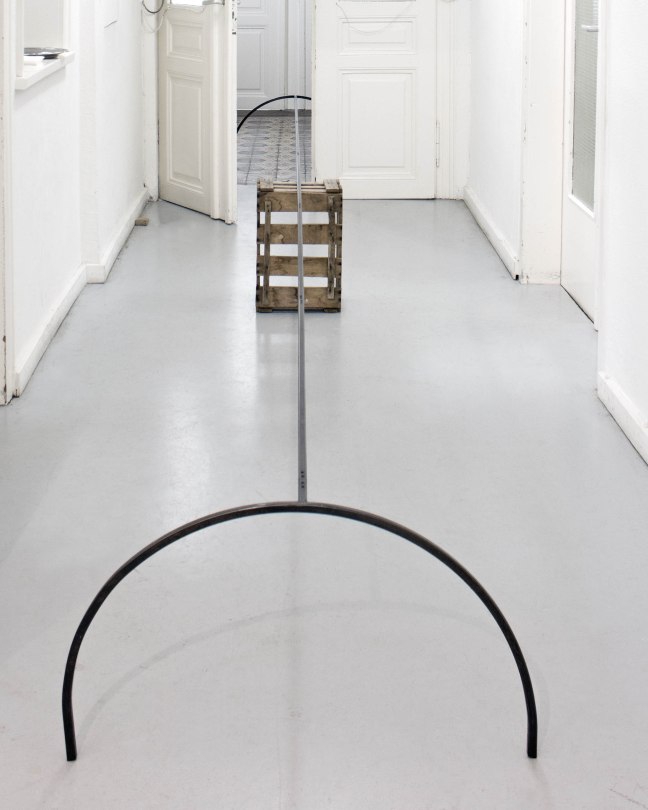 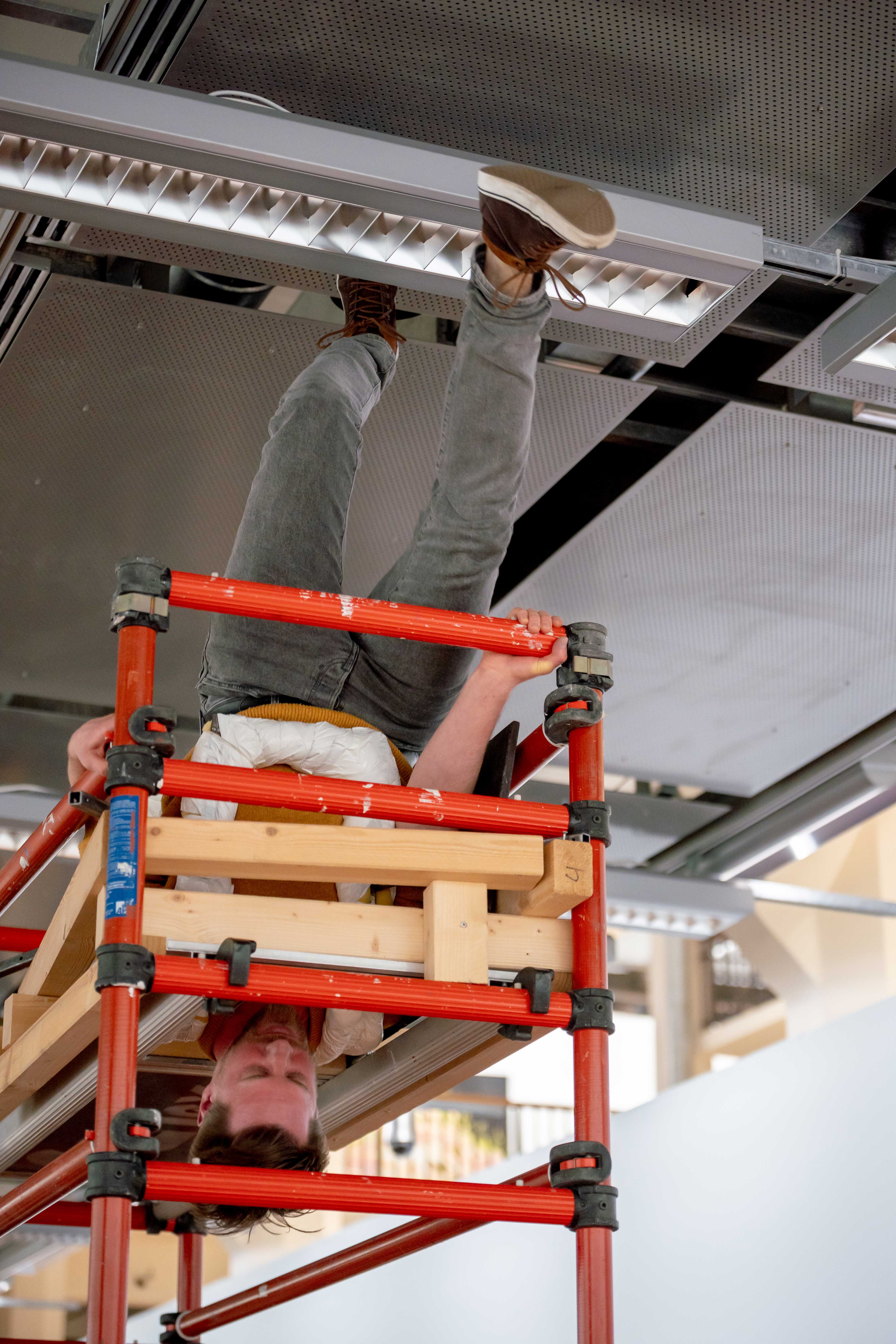 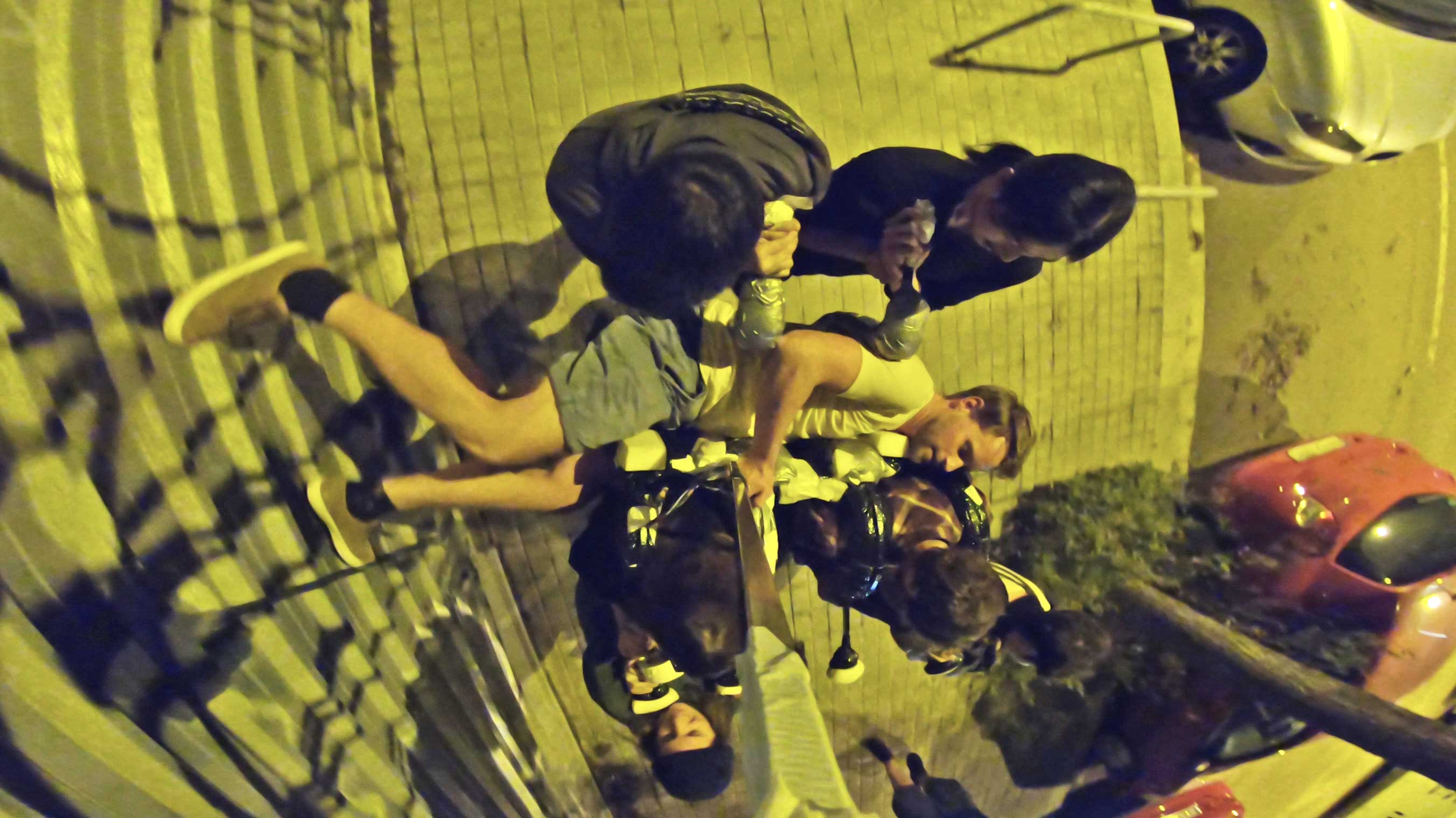 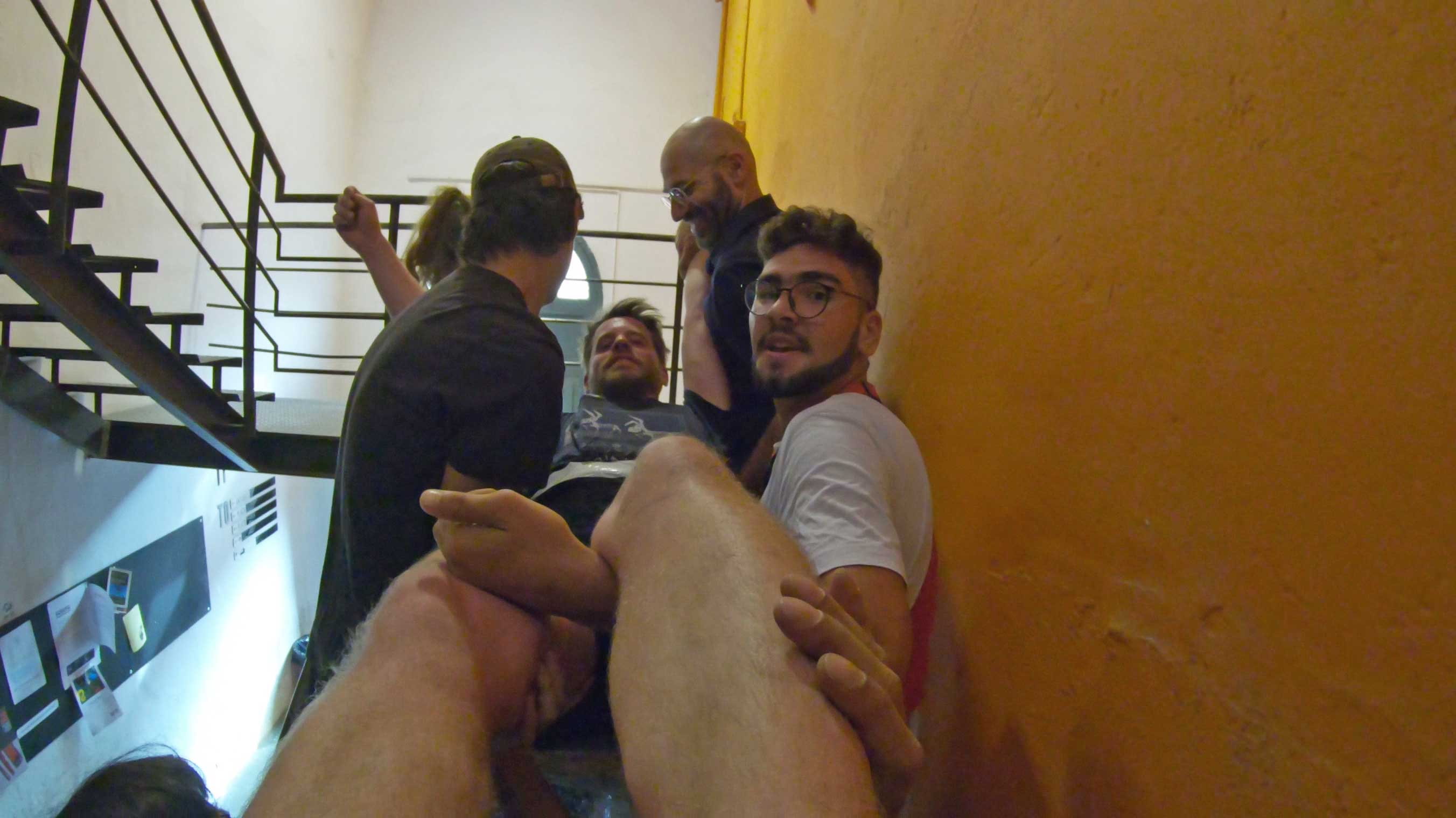 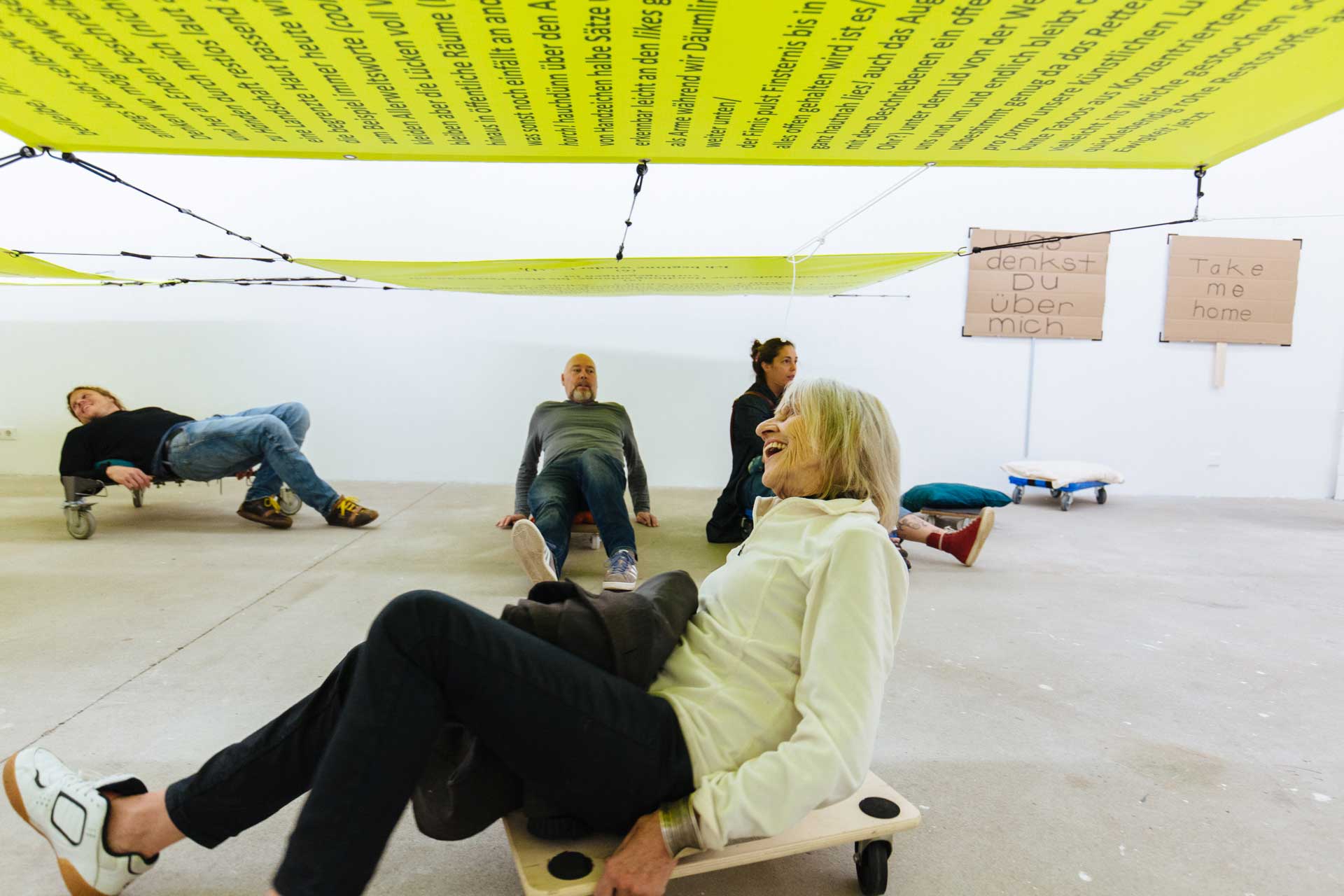 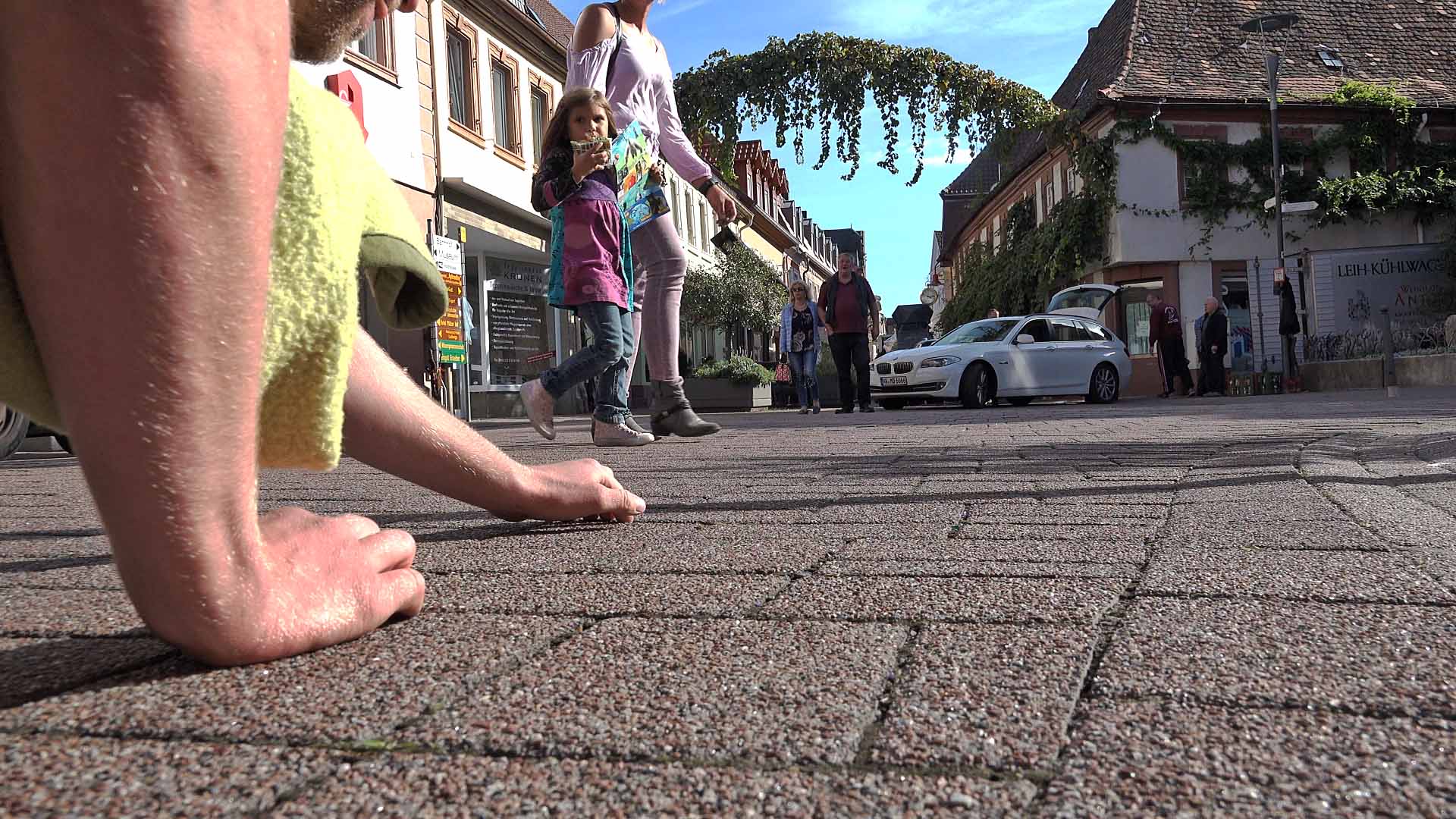 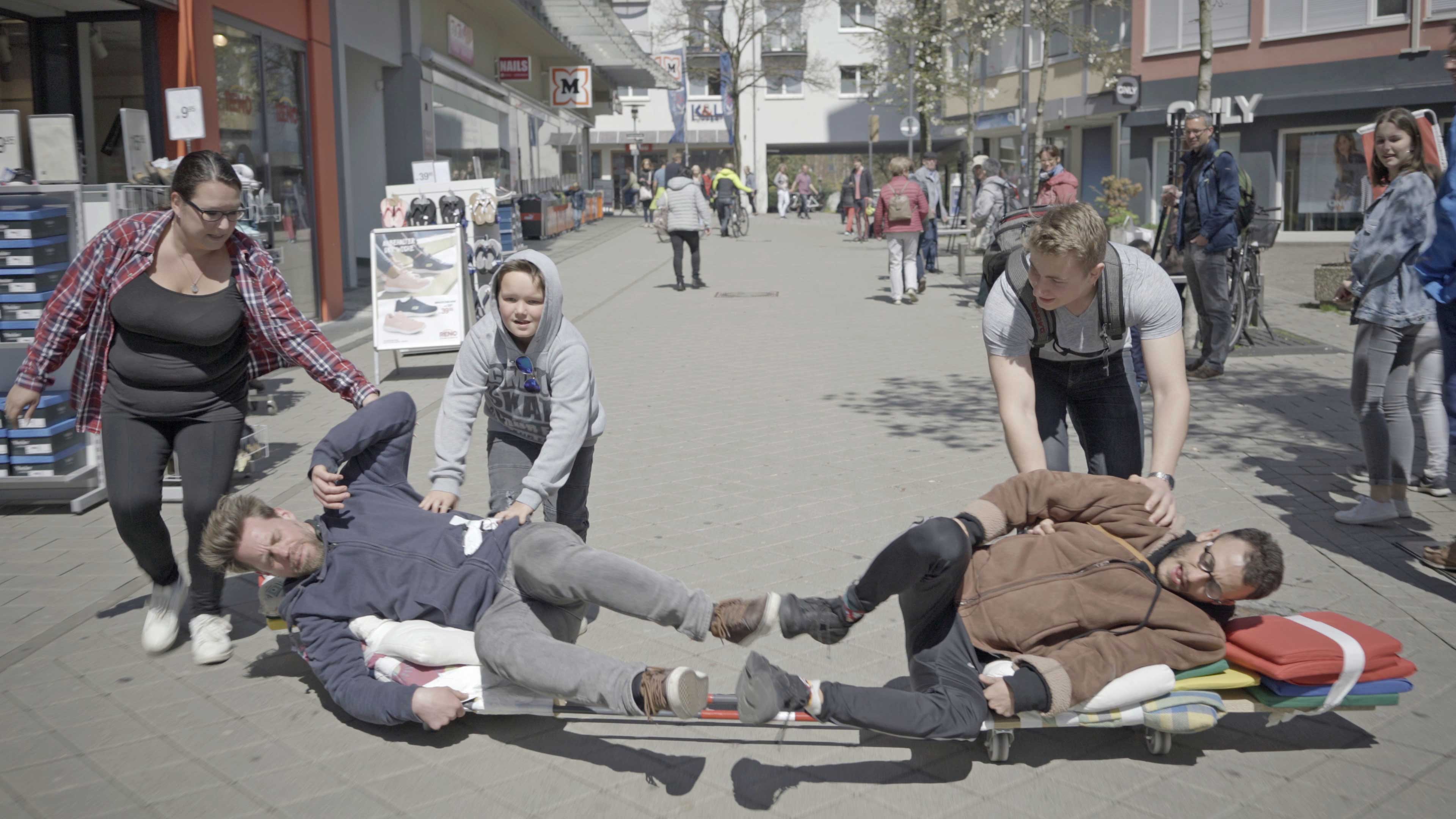 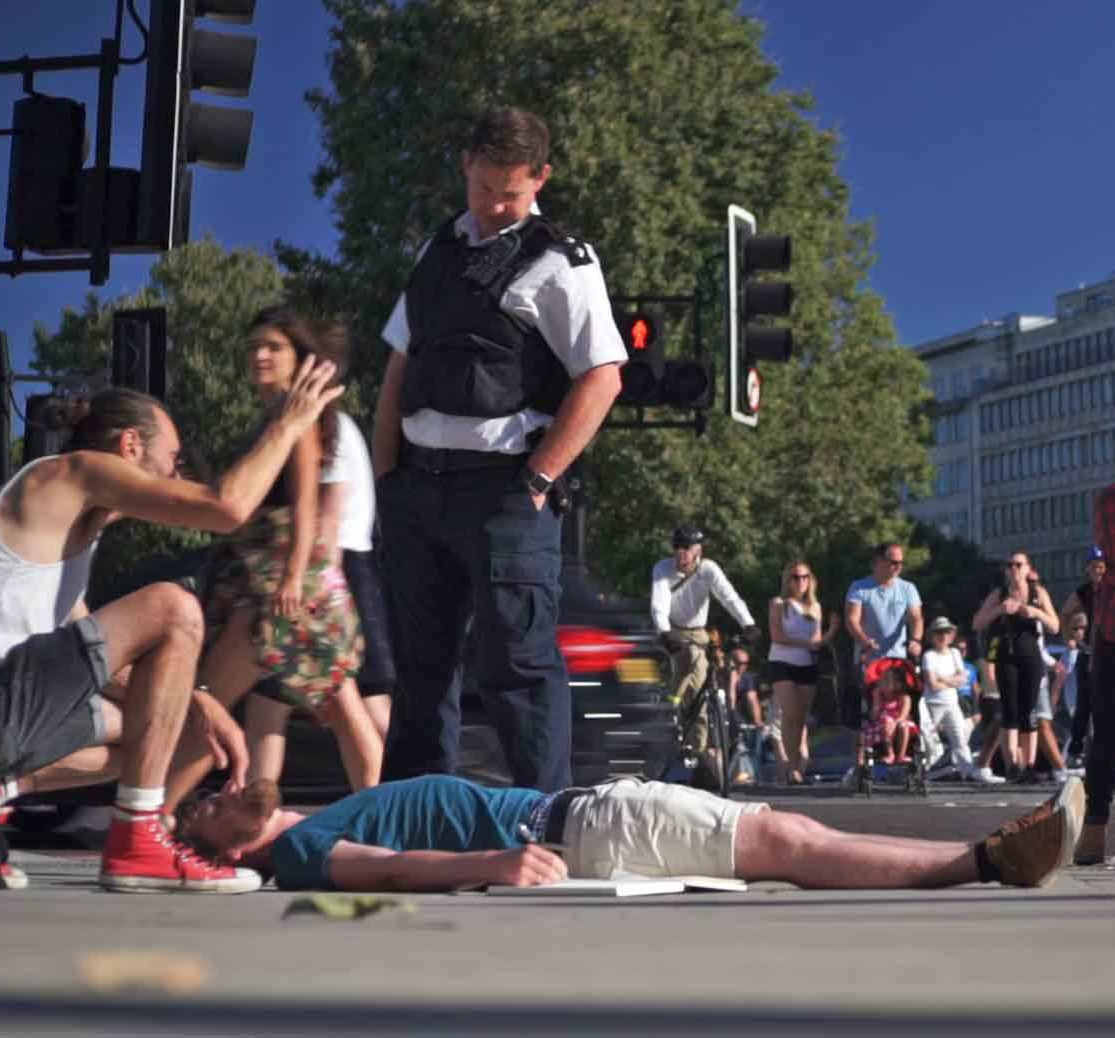 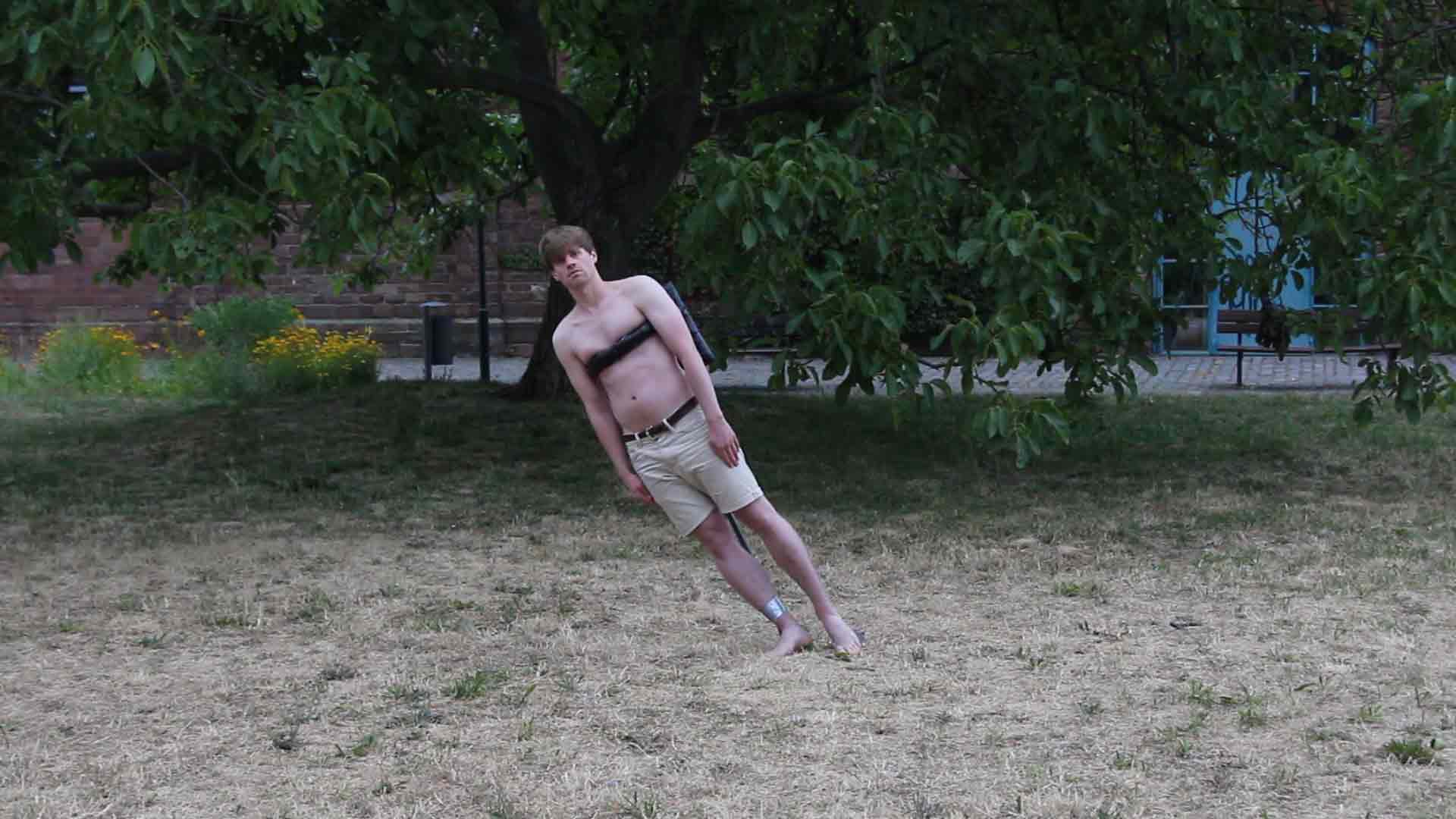 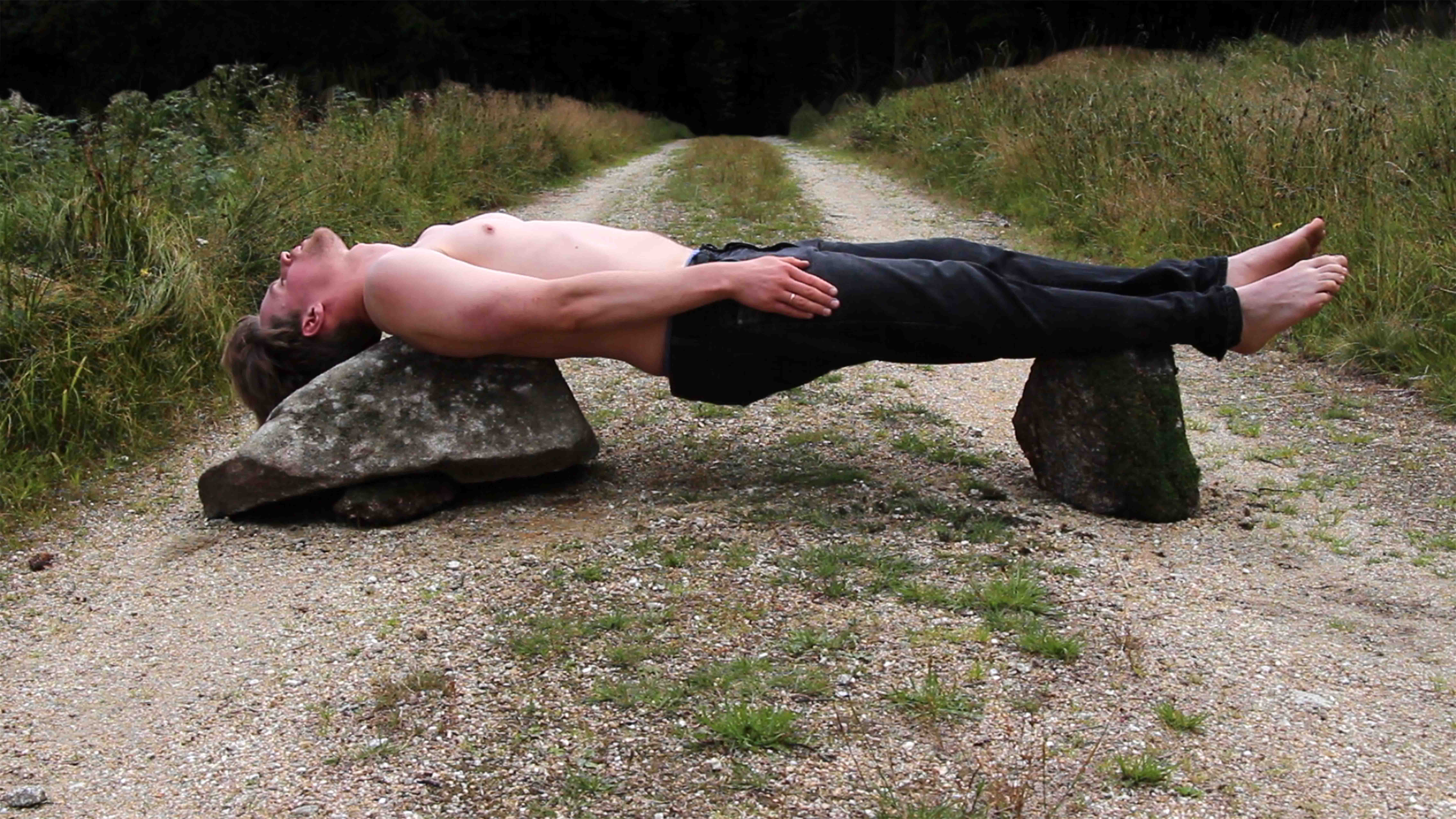 This is just a small selection of my overall artistical practice. For more details, please contact me: